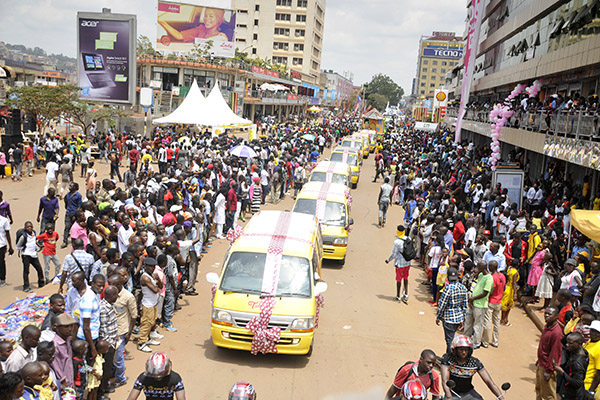 The much anticipated Kampala City Festival which took place on Sunday saw platinum sponsor, Bell Lager put up a show that can be compared to none other.

The UBL Tubbaale promotion also came to an end with the grand finale held at the Kampala City Festival. To mark the end of the promotion which has been all about rewards, Bell Lager gave away a brand new van to one lucky winner at the festival. All one had to do to stand a chance to win was buy a Bell Lager which would automatically enter you into a raffle. The raffle, conducted by UBL Marketing and Innovations Director, Juliana Kagwa saw a one Kato Ibra emerge winner.

Ibra said he has been a Bell Lager customer for years and could not wait to enroll in a driving school to be able to fully enjoy his prize. He was congratulated by a number of friends who had come to attend the festival with him.

Hitting its 5th year, the biggest street party in East Africa is a signature brand that draws multitudes to Kampala every October to celebrate culture, innovation, unity and social life. It’s a highly anticipated moment for revelers to share, learn and network while acting as an economic engine for companies, organizations and small businesses to flourish.

Beer flowed through the day and into the night. At exactly 7p.m. the lights were dimmed and Black Bell ushered in an experience dubbed “Go Next Level”. With raunchy dancers pulling moves that left many ladies envious, Black Bell took the revelers through an exciting 3 hour display of non-stop deejay mixing.

There was no missing the complaints when the party came to a close at 11:50p.m., thanks to rules set by KCCA that the festival would come to an end at midnight. If you missed the festival this year, we bring you the highlights in a pictorial below.

The much anticipated Kampala City Festival which took place on Sunday saw platinum sponsor, Bell Lager put up a show that can be compared to none other.