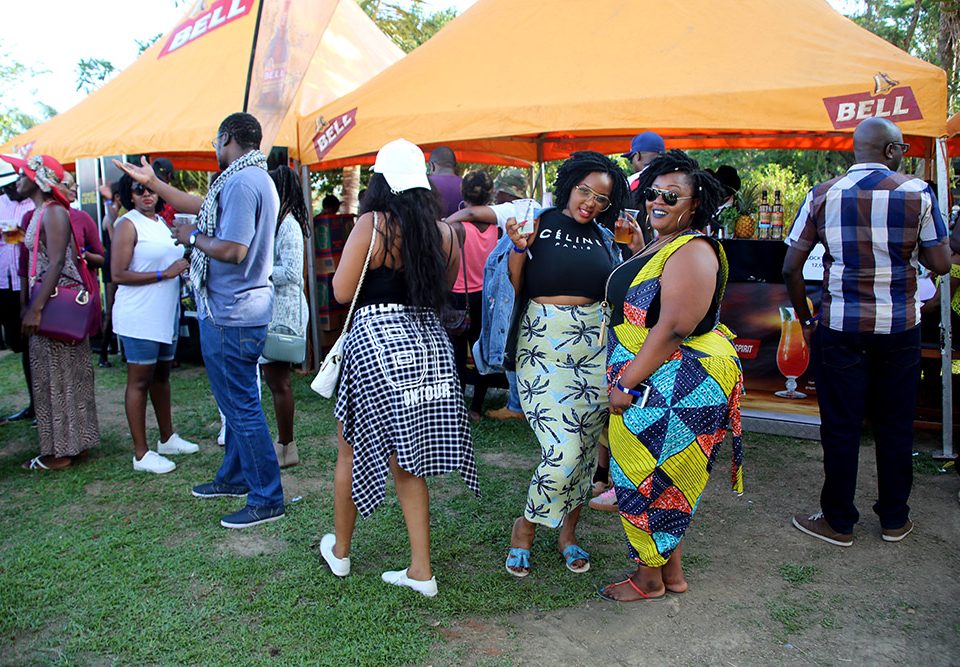 Sunday was the day for legendary dynamic duo Benon and Vamposs, reggae and ragga king Bebe Cool, reggae maestro Might Son among others, to put their live music skills to the test at the third edition of Roast and Rhyme.

Under the theme ‘Raggae Nyam Nyam,’ the event which was held at Jahazi Pier, Munyonyo saw reggae fans jam packing the venue by 1PM in tow with their braais (BBQ cooking stoves), ice coolers, camping chairs masai blankets (lesu) and of course meat of all kind and by 3PM, it was already full house.

Hosted by Swangz Avenue and sponsored by Bell Lager the show saw performances kicking off as early as 2PM with Ife the poet among other artistes signed by the label company such as Zulanda who sang his popular hit ‘Mukwano Gwo.’ Mighty Son followed suit delivering an energetic performance with popular songs such as ‘Step on the floor,’ ‘Uptown Girl,’ among others that set the pace for other performers.

Keeping the crowd entertained and dancing to thrilling music in between acts was spin master, DJ Crim.

At about 7PM, duo Benon and Vamposs set off with an energetic performance and a number of songs. As soon as they started, it was a case of ‘who could jump the highest and shake the hardest.’ The artistes who also love to dance, performed songs like ‘Mumuleete gyendi mwe,’ ‘I know,’ ‘Smart wire,’ among others which brought out some insane dance strokes from both revelers and the duo.

By the time Reggae and Ragga artiste Bebe Cool took to the stage at around 10PM, the crowd went ecstatic upon his arrival and that was officially the time to put the muchomo aside, to dance and sing along to his music. He made his performance interactive as Gagamel band backed him up performing a couple of the crowd’s favorites such as ‘Kabulenganye’ before he was joined by Chizzo amidst wild cheers from the crowd.

“Roast and Rhyme is about promoting purely Ugandan music. The last edition was about soul music; this time round we wanted to bring in a new musical experience with a reggae touch to the event. Bringing back Benon and Vamposs and putting them on one stage as Bebe Cool was an impeccable choice.” Bell Lager brand manager Maureen Rutabingwa relayed.

“This is our way of appreciating and promoting Ugandan talent and also showing our consumers a good time.” Maureen concluded.

By midnight, the event was a wrap.

Sunday was the day for legendary dynamic duo Benon and Vamposs, reggae and ragga king Bebe Cool, reggae maestro Might Son among others, to put their live music skills to the test at the third edition of Roast and Rhyme.