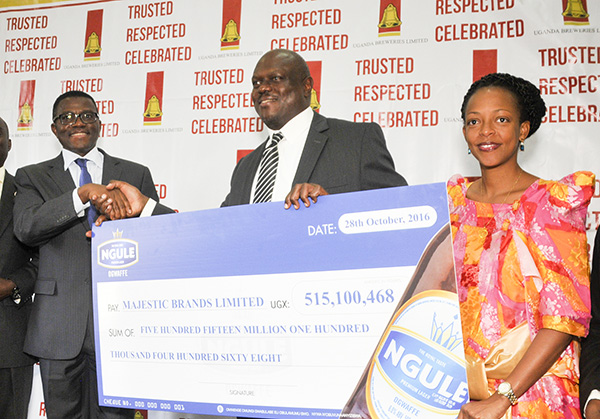 On Friday,28th June, UBL handed over a cheque of royalties worth UGX515 million accrued to the Buganda Kingdom in the previous financial year. In January 2016, Uganda Breweries Limited (UBL) announced a partnership with Buganda Kingdom’s investment arm, Majestic Brands to produce a beer called Ngule. This partnership consists of a revenue sharing agreement that is beneficial to both entities.

The cheque was handed over to Katikkiro Charles Peter Mayiga by Mark Ocitti, Managing Director of UBL at Bulange, Mengo. The handover was done in the presence of esteemed members of the Lukiiko and Buganda Muluka chiefs.

Speaking at the ceremony, UBL Managing Director, Mark Ocitti said the partnership between the brewery and the kingdom was very fruitful revealing that Ngule had been an overwhelming success from launch. “Since introduction to market in January, Ngule has received an overwhelming positive reception from the market. It is a great quality and delicious beer that consumers have grown to love. We are pleased today to be handing over what is owed to the Kabaka from this partnership as promised.”

Owek. Charles Peter Mayiga hailed Ngule as “wealth-generating” innovation by the Kingdom. “This partnership came into effect with the aim of stimulating income levels of both the people and the kingdom and we are glad that Ngule has achieved this for us.” 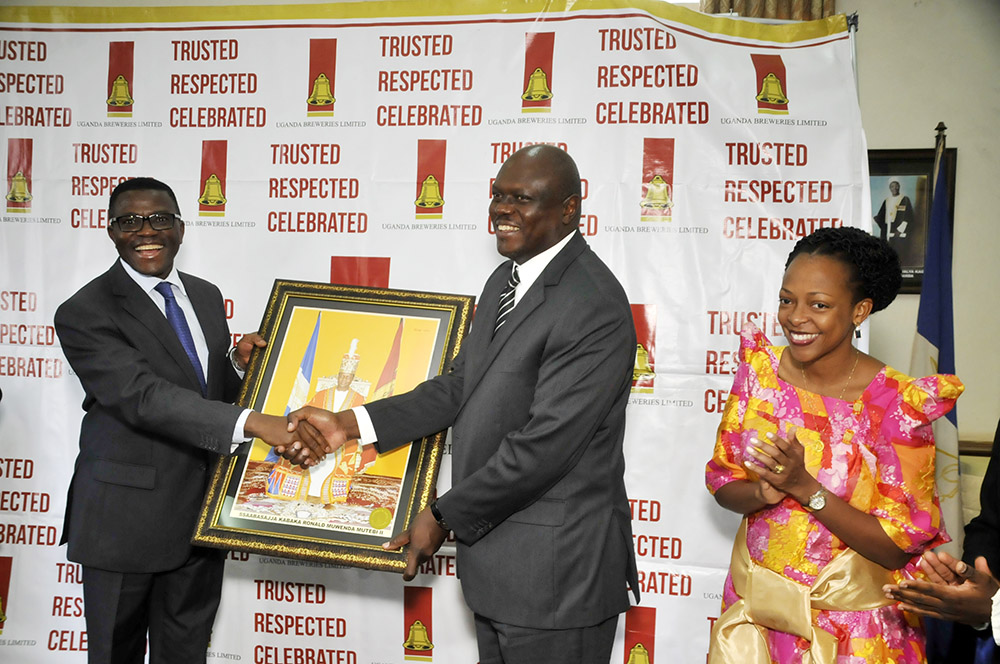 The beer is made from local ingredients; cassava and sorghum, which are exclusively sourced from the kingdom. Sold at a recommended retail price of UGX2, 000, Ngule is one of the most affordable beers on the market.

Through the Local Raw Materials Program, UBL spends an estimated UGX 20 billion annually on local raw material sourcing with the aim of contributing to self-sustenance of communities and wealth creation.  “Due to the increased market demand for Ngule, our monthly cassava supply requirements have gone up from 700 metric tons to 1,500 metric tons. We need cassava to continue to produce this beer,” Ocitti said.

The Katikkiro hailed the farmers within Buganda for responding to the call to grow cassava in order to benefit financially from Ngule.

“The cassava for Ngule is sourced from farmers within the kingdom with the aim of strengthening household incomes. This financial year, the Kingdom prioritized agriculture, with specific emphasis on cassava to ensure our people have sustainable income. We have encouraged our farmers to grow cassava because there is market for it as a raw material for Ngule,” he added.

In his 2016/17 budget speech to the Lukiiko in June this year, Owek. Robert Waggwa Nsibirwa, the Kingdom Finance, Investment, Planning and Economic Development Minister announced plans to tackle unemployment among the youth in Buganda. He said the kingdom would start a cassava nursery in all the 18 counties at a cost of UGX 500 million and spend UGX 3 billion procuring coffee, matooke, and cassava seedlings.

This was being done in consultation with National Agricultural Research Organization [NARO] who recommended cassava types NASE 03, NASE 14, NASE 19, NAROCASS 1, and NAROCASS 2 that are resistant to diseases and give big yields.

The Katikkiro said Ngule is one of the many initiatives of the kingdom and urged the people to continue supporting their King.

UBL handed over a cheque of royalties worth UGX515 million accrued to the Buganda Kingdom in the previous financial year.