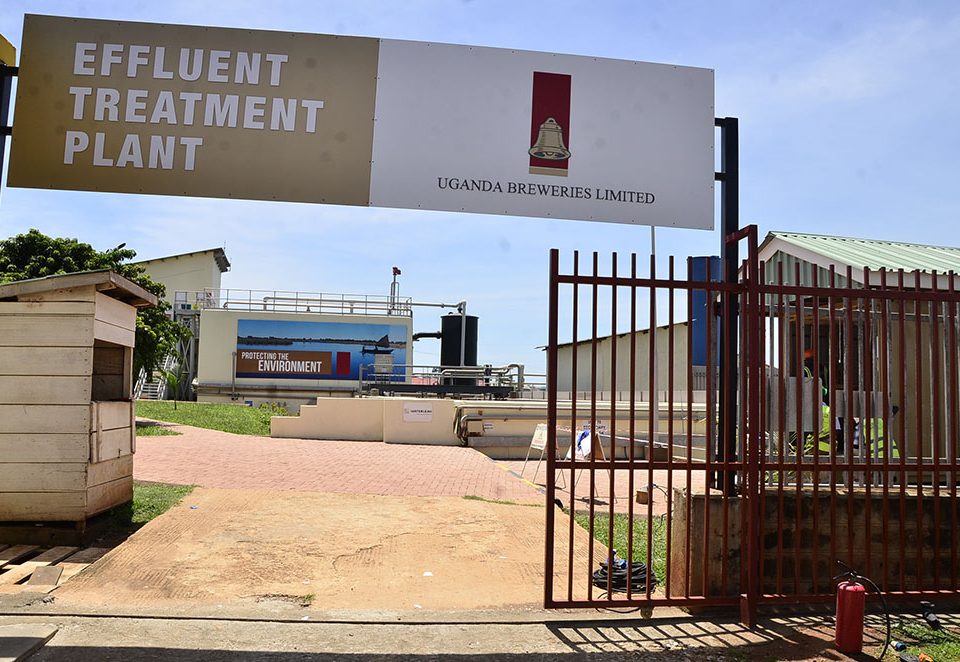 According to the World Health Organisation, safe wastewater treatment and reuse are fundamental to protect public health.

With the desire to make the water that they use in their day-to-day operations in the brewery pure and reliable, UBL set up a multi-million Effluent Treatment Plant (ETP) to treat all its water before it is disposed of back to Lake Victoria, its original source.

“The water we use in all our operations is from the lake so it is important to us as a business to keep Lake Victoria very clean because it is one of the key resources we use here,” says Ms Rhona Arinaitwe, the UBL communications manager.

Ms Arinaitwe says they make sure that all the water they dispose of back is properly treated to the required standards with the aim of having the water cleaner than what they initially got from the lake.

HOW THE PROCESS WORKS

The water from all sections of the brewery comes through all the drainages and it is sieved from the course screen to remove particles.

It goes to the effluent pump pit which later pumps it to the retention tank. Here, it is controlled by the level switches and when the water builds up to a certain level, the switches start automatically and pumps water into two retention tanks; the equalization tank and the emergency tank.

“Depending on the quality of water that comes through, we are able to know where to put it either emergency tank or equalization,” says Mr Ronald Egesera, a UBL technician, adding that the water goes to the fine screen which removes the remaining dirty particles before it goes to the lake.

The process involves removing solids from the waste stream, restoring the PH balance of the water, converting organic material into biogas and sludge, disinfecting the waste water and then returning it to the lake.

“We have constructed a new reactor and when you combine it with the old one, it doubles the efficiency of the old one, so with these two in place, this plant can treat up to 12,000kg COD per day,” he says.

More than just a treatment plant

Mr Egesera says the plant is also multi-purpose as it generates carbondioxide, hydrogen sulphur (off gas) and then the methane which they just burn and do not allow into the atmosphere because it is one of the greenhouse gases.

“Once more, we are able to use the biogas as fuel to power our brewery and the sludge can be used by local farmers as a fertilizer who we give it to at no cost. The silage is highly fertile, our new belt can produce about 20 of manure tonnes per day,” he says.

The technician also notes that before one operates the plant, they must have a working permit and a discharge permit.

“The letter is got from NEMA and we sample this water and take to them for analysis. We have the rights of doing this and it is an effort to adding value to the environment by doing away with contribution to water safety,” he says.

The plant was set up to treat waste water from the brewery before it goes back to the lake. This is a requirement from regulatory authorities such as Nema and the National Water and Sewerage Corporation for one to run a brewery.

“Water from the brewery is highly contaminated so if you just send it to the lake, you will lose fish and with time, you will not have the lake in existence, so we want to avoid this by contributing to clean water,” says Mr Egesera.

He says the purification of water before it goes to the lake is something they ought to do since it benefits the brewery and the community.

“We need water for our general operations in the factory and so does the general public. So if you do not protect the lake, where will you get it from? With time, you will not be able to run the brewery, people will have contaminated water and fish will die too,” he says.

In 2015, UBL completed the refurbishment of the Effluent Treatment Plant, which increased the capacity to treat their industry waste even if their capacity had to grow by thousands of hectolitres.

Ms Arinaitwe says the original ETP was constructed in 2005 to manage a production capacity of 800,000 hectolitres per year, a project that cost Shs1.5 billion.

“As the business grew over the time, we embarked on an expansion project that was completed in January 2017 to be commissioned in March 2017. This project cost Shs17.4 billion, bringing it to a total of Shs18.9 billion spent on the ETP project,” she says.

The expansion allows for UBL to comply with local regulatory consent limits and its commitment to the environment for the discharge of waste water at an expanded site production capacity of up to 1.4 million hectolitres per year.

UBL has also been involved in other water protection measures. This has been achieved through a number of capital projects such as the recovery of filter-backwash water for floor washing in non-production areas, machine cooling water recovery and reuse and improved metering.

“We have also worked hard to improve our awareness on saving water. This helps us to keep track on how water is used and how it benefits the company and society, it is a big resource that does not need to be wasted,” Mr Egesera notes.

UBL also invests heavily in water projects that have positive and long-term impact on thousands of people by reducing the incidence of water borne diseases and by releasing time otherwise spent by women and children in search of water for alternative income generating activities.

According to the World Health Organisation, safe wastewater treatment and reuse are fundamental to protect public health.