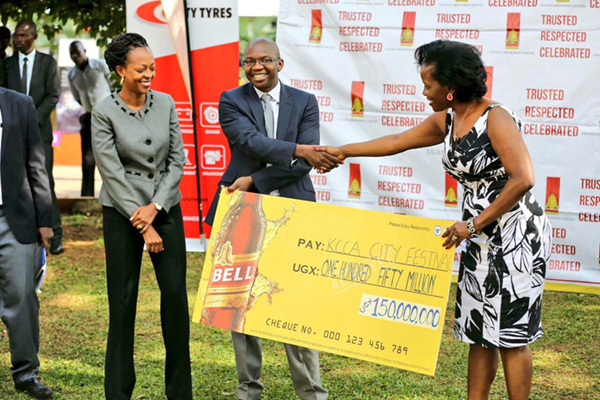 Bell Lager has announced a UGX150million sponsorship of the annual Kampala City Festival organized by Kampala Capital City Authority. The announcement was made by Mr. Nyimpini Mabunda, the Managing Director of Uganda Breweries Limited (UBL) at the launch event of the festival which was held on Monday at City Hall.

Kampala City Festival is the city’s biggest annual celebration and will return in October this year. This announcement was made at City Hall at an event presided over by the Hon. Minister for Kampala, Ms. Beti Kamya Namisango and Ms. Jennifer Musisi, the Executive Director of KCCA.

This year again, Bell Lager comes on board as a platinum sponsor.

“Being an authentic Ugandan but specifically Kampala born brand, there’s no beer brand in Uganda better placed than Bell Lager to support the Kampala City festival. Bell Lager shares a rich heritage with Kampala and we are honored to be part of the city festival,” said Mr. Nyimpini Mabunda, the Managing Director of Uganda Breweries Limited (UBL).

This year's festival themed "A Black Yellow Red affair" will focus on celebrating our Ugandan culture and diversity. The festival designed to be the biggest street party in East-Africa is now an annual event that brings together all city dwellers, stakeholders and business people. It focuses on togetherness, one of the city’s oldest and richest cultural ideas.

Speaking at the event, Robert Kalumba, KCCA Spokesperson revealed that the year the festival was introduced, it attracted 300,000 people. This number has since grown. Last year, the festival attracted 4 million people. KCCA hopes to attract 10 million people to attend this year.