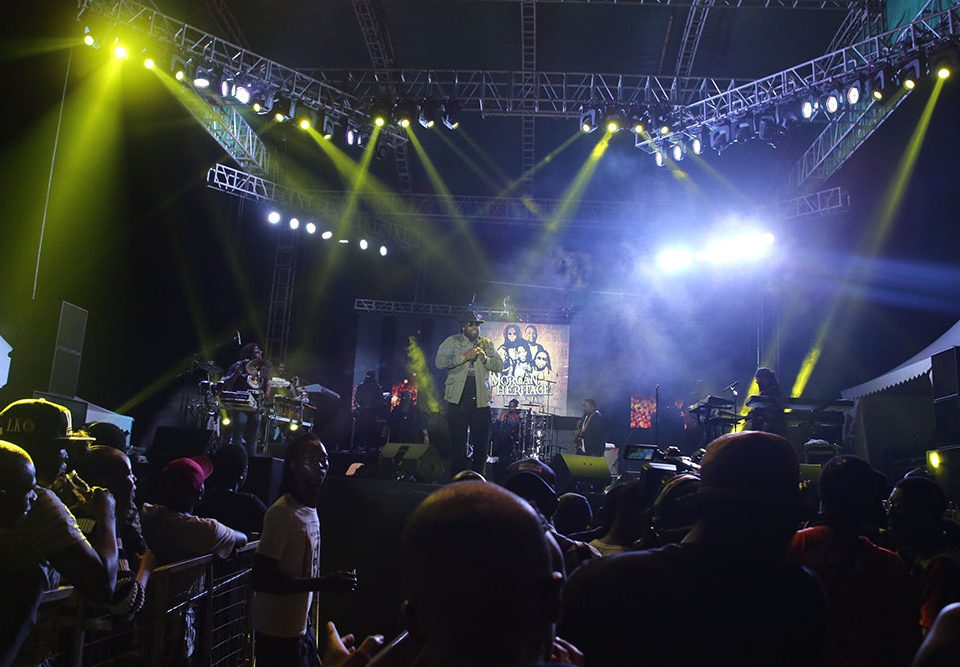 Morgan Heritage, the world’s royal family of reggae performed for the first time ever in Kampala on Thursday, 13th April in a mega concert that was powered by Bell Lager.

The Grammy award winning band arrived on 11th April ahead of the much anticipated concert. Band members and siblings, Gramps Morgan, Peetah Morgan, Mojo Morgan and Nakamyah Morgan graced the stage at the Lugogo Cricket Oval. Their performance was preceded by a performance by budding artist, Jemere Morgan, a son to Gramps Morgan.

The gates to the Cricket Oval were opened as early as 4p.m. People began streaming in at 5p.m. and by 8.30 p.m., the Oval was filled to capacity.

The concert kicked off with performances by turntable kings Shiru, Naselow and Nimrod with Mr. Mosh as the event emcee. At 9p.m., Juliana took to the stage in what was termed a surprise performance, since no curtain raisers had been announced for the show. Her performance was followed by Vampino, whose hit ‘Smart Wire’ had the crowd pulling energetic dance moves.

Jemere Morgan hit the stage shortly after, performing several songs including International Love. His performance preceded the Grammy Award winning reggae band who performed hit after hit for the next two hours, leaving the crowd enthralled with their stage presence.

An hour into the band’s performance, Peetah Morgan made a surprise announcement calling Ugandan singer Jose Chameleone to the stage. He joined them on the stage to perform a collaboration with the band.

The concert ended shortly before midnight and revelers could be heard calling for an encore when the band left the stage.

Those who attended the concert have said it could only be rivaled by the Ne-Yo Pop and Jam concert in 2015 that was also organized by Bell Lager.

The concert featured a VVIP lounge courtesy of Singleton. The VVIP treatment included reserved VVIP parking, a chauffeured ride to the VVIP lounge, a three course meal and a special bar that featured UBL’s wide portfolio of spirits including Johnnie Walker, Uganda Waragi, Singleton, Baileys, among others.

Morgan Heritage, the world’s royal family of reggae performed for the first time ever in Kampala on Thursday, 13th April in a mega concert that was powered by Bell Lager.