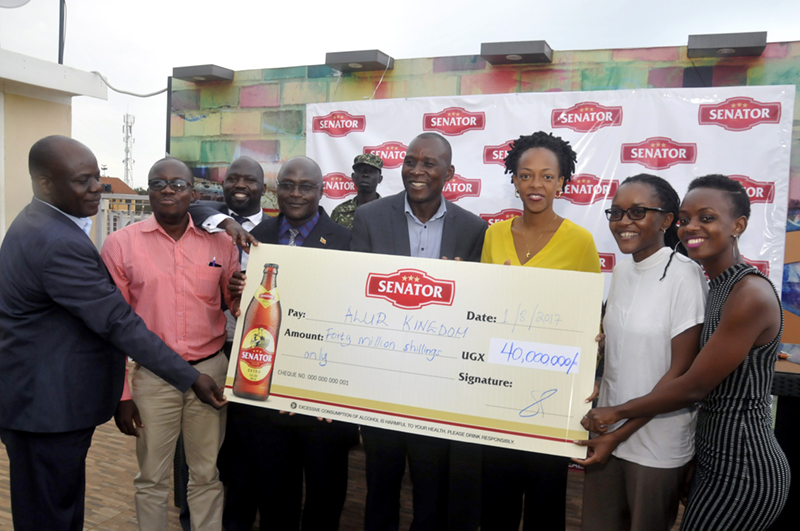 Senator, a beer produced by Uganda Breweries has announced a UGX 40 million shillings sponsorship package towards the Alur Kingdom coronation celebrations. The announcement was made by Ms. Juliana Kagwa, Uganda Breweries Marketing and Innovations Director, in the presence of the Kingdom’s Prime Minister and cabinet members.

The anniversary is scheduled for October 30th 2017, marking 7 years of the coronation of King Ubimu Philip Olarker Rauni III.

“At Uganda Breweries, our brands are made to be part of celebratory occasions and through this sponsorship, we will contribute to the Alur Kingdom’s coronation celebrations, whose purpose is the preservation of culture and continuity of tradition,” said Ms. Kagwa.

The Alur Prime Minister, who represented the King, said the celebrations would be a three month long event expected to showcase the unique tradition and culture of Alur people through sports and music.

“Through this event, we will showcase our diversity and inclusion, share traditional customs, educate our youth and the public on our culture and traditions. All the activities around this celebration are focused on the preservation of Alur’s history, traditions, culture, and heritage,” said Rt. Hon Vincent Ochaya, Prime Minister of the Alur Kingdom.

Senator, which was introduced to the market in 2005, is a high quality affordable beer whose main ingredients are sorghum and cassava, all of which are sourced locally from Ugandan farmers. Produced by Uganda Breweries alongside other award winning brands; Bell Lager, Uganda Waragi, Tusker, Guinness and Pilsner Lager, Senator has been a year-on-year silver medal winner of the prestigious international Monde Selection awards.

In 2017 alone, Uganda Breweries invested UGX 64 Billion to secure local raw materials used in our beer production, working with over 17000 farmers. This is done with the aim of contributing to sustainable livelihoods of farming communities. A good percentage of this comes from farming communities located in Northern Uganda and so we find it fitting to partner with the Alur Kingdom,” Ms. Kagwa added.

Rt. Hon Vincent Ochaya and members of the Alur Kingdom cabinet were also taken on a tour of the Uganda Breweries plant in Luzira and given a step by step guide on the Senator brewing process.

“I call upon the Alur people and the people of Northern Uganda to move away from the consumption of informal and unregulated alcohol that is potentially harmful to their health. In Senator, we have an affordable beer brewed to World quality standards,” Rt. Hon Vincent Ochaya added.

Reports indicate that the Ugandan market consumes about 110.6 million liters of alcohol, of that, 67.7 million is from informal alcohol and 43 million liters from licensed brewers. This informal alcohol is unregulated, lacking the relevant quality controls and stringent hygiene and carries with it an enormous health risk to consumers.