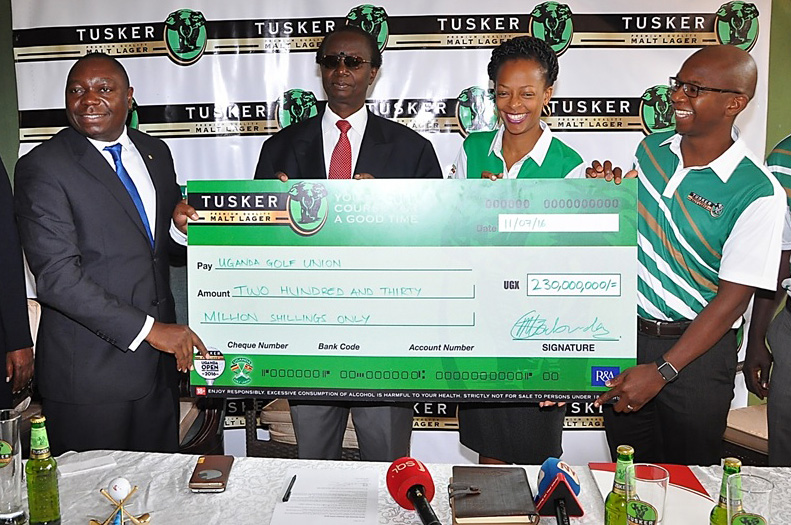 Uganda Breweries Limited, through its flagship premium beer Tusker Malt Lager, for the 6th year in a row, has been unveiled as the title sponsor of the Uganda Golf Open that is set to tee off on the 10th of August, 2016.

Following the tremendous success of last year’s Uganda Golf Open, Tusker Malt Lager has moved to augment its commitment to the game of Golf by further increasing its cash sponsorship of this year’s Open. Mr. Nyimpini Mabunda, the Uganda Breweries Limited Managing Director, made the announcement at a press conference held at the Uganda Golf Club – Kitante. Tusker Malt Lager has increased the cash sponsorship to the Uganda Golf Open from UGX 200 million shillings to UGX 230 million shillings.

An additional UGX 270 million shillings as none cash sponsorship has also been injected into the tournament, taking the total sponsorship kit up to UGX 500 million shillings. The sponsorship kits include: media, player uniforms, merchandise, and logistical elements for prize giving dinners among others. “We have increased our sponsorship to resonate with the status that the game of golf has attaining. The Tusker Malt Uganda Open provides an opportunity for renewal and development of golfing skills in Uganda, and initiation of new acquaintances while renewing old ones. As all true sports lovers know, the beauty of the whole exercise is not just in winning but in participating.” Said; Mr. Nyimpini Mabunda, the Uganda Breweries Limited Managing Director

The Uganda Golf Club Course, which is considered to be one of the toughest courses in the country, will be awash with over 500 amateurs, pros and seasoned pros as they try their hand at not only outsmarting their competition and being bestowed upon the title of 2016 Winner of Uganda Golf Open. According to the Uganda Golf Union, there will be two parts of the tournament. The armatures will be playing from 10th – 13th August, 2016 while the professionals will play from 31st August – 3rd September, 2016.

Mr. Johnson Omolo, the President of the Uganda Golf Union explained that in order to attract a sizeable field from the Sunshine Tour and MENA (Middle East and North Africa) regions, the dates for this year’s Uganda Open had been chosen to suit their schedule. “We had consultations with the Sunshine Tour team and we set our dates for this year’s Golf Open, so that we could have the participants from the tour also participate in Uganda. We are also hoping to attract players from the MENA (Middle East and North Africa) tour. The course at the Uganda Golf Club has been prepared to match the highest global standards. All tests that have been carried out on these luscious grounds have proved that the Uganda Golf Club has the capacity to handle a tournament of this magnitude.” Reiterated Mr. Johnson.

So far, Uganda Golf Union has received confirmation of 15 national team entrants from Kenya led by Captain Bo Ciera for the Amateur event. Other entrants are from Zambia, Tanzania, Rwanda and Burundi.

This year, Tusker Malt Lager has staked out a prize award of UGX 110 million shillings for the professionals.

Restating their support, UBL Managing Director Mr. Nyimpini concluded; “Our ultimate aim is to work closely with the union to turn the Tusker Malt Uganda Golf Open into one of the biggest and most sought after tournaments in Africa. To the Ugandan golf professionals and amateurs who will participate this year, we wish them the best of luck as the fans will be awaiting for yet another local champion.”

Uganda Breweries Limited, through its flagship premium beer Tusker Malt Lager, for the 6th year in a row, has been unveiled as the title sponsor of the Uganda Golf Open that is set to tee off on the 10th of August, 2016.