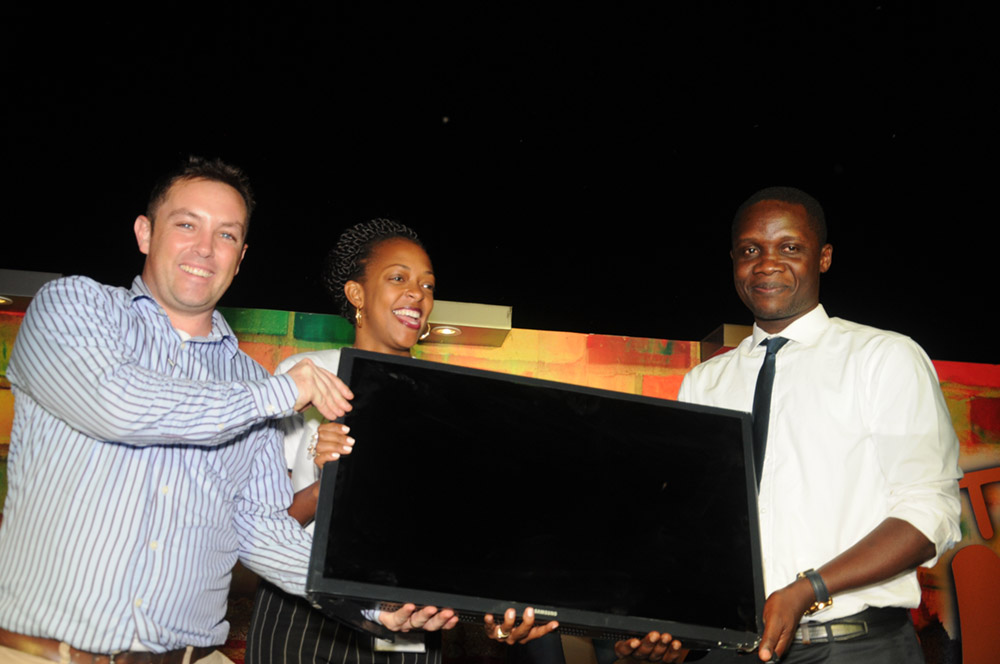 Uganda Breweries Limited (UBL) today announced the launch of the biggest ever under the crown consumer promotion to-date, “Tubbaale”. The SMS based promotion will feature three of UBL’s renowned beer brands; Bell Lager, Tusker Malt Lager and Guinness. Tubbaale, which will run for the months of August and September, will see customers across the country being rewarded for drinking their favorite beer.

Announcing the promotion, UBL’s Managing Director, Mark Ocitti Ongom said, “UBL has staked the biggest prizes in the history of beer promotions. The prizes are in two categories; instant prizes like airtime and giveaways to be won in the bars; and redeemable prizes of up to 3 billion shillings which will include plots of land in Kampala, vans, motor bikes, flat screen TVs and so much more.”

Bottle tops of all the three participating brands will carry a code under the crown for the duration of the promotion. “It’s pretty simple; when you buy a Bell, Tusker Malt Lager or Guinness, check under the crown for the code. SMS the code to 6050 and you stand a chance to win fantastic and life changing prizes,” Ocitti added. Explaining the campaign mechanics, Ocitti elaborated that after texting the code, the customer will receive an auto generated response indicating the prize they have won and how to redeem it.

UBL’s Marketing Director, Juliana Kagwa said Tubbaale is essentially about coming together and having fun as Ugandans. “Tubbaale is one big Ugandan celebration through which we will be rewarding our customers for their support in a big way.”

Kagwa said the promotion would be countrywide and would include regional celebrations. “Our customers are spread all over the country and so we are taking this promotion to the whole of Uganda. We will have 4 regional celebrations in 4 major towns in Uganda. These celebrations will be a one stop center for fun. You will have the biggest entertainment acts in music and comedy and a number of fun activities all in one place. If you love fun, Tubbaale has been specially made for you.”

UBL announced that they had set up 4 redemption centers spread across the country from which winners would reclaim their prizes. “We will have one center in each of the following towns; Kampala, Mbarara, Gulu and Mbale. For redeemable prizes such as motor bikes, vans and land, customers will need to come to a center nearest to them. They will be required to present their text message confirming the prize and provide proper identification whereas customers who win the instant prize (airtime) will have their accounts credited immediately,” Kagwa said.

Kagwa emphasized that confirmation and communication of prizes would only be made through UBL’s registered SMS number; 6050. “Do not be fooled by anyone claiming to act on our behalf. All customer queries should be directed to our customer helpline; 0781847187 or our social media pages (Bell Lager, Tusker Malt Lager and Guinness),” she added.

Ms. Kagwa encouraged the public to participate in the promotion.

“You can participate in Tubbaale at a bar near you, just look out for our spin the wheel activations at supermarkets. Follow Bell, Tusker Malt Lager or Guinness pages to find out where the next big activity will be and join us as we celebrate!” she said.

Ocitti mentioned that the Tubbaale promotion was part of UBL’s 70 year anniversary celebrations. He said UBL is happy to be able to give back to their customers and thank them for supporting the business through the years.

“70 years is a huge milestone for us. As one of Uganda’s oldest and most celebrated companies, we are using this anniversary to spread cheer. We invite you all to celebrate with us,” he said.

“While we encourage our customers to participate in the promotion, we urge them to drink responsibly and have called on participating outlets not to sell alcohol to anyone under the age of 18,” Ocitti said.

Uganda Breweries Limited (UBL) today announced the launch of the biggest ever under the crown consumer promotion to-date, “Tubbaale”.