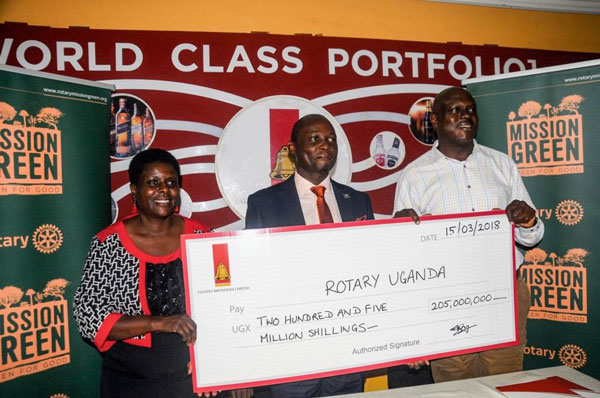 Uganda Breweries Limited through its Water of Life initiative has signed a partnership with Rotary Uganda to jointly restore 200 hectares of forest reserves within Lake Victoria water catchment areas.

Forest reserves serving as water catchments for Lake Victoria have for a number of years been under massive deforestation as the indigenous trees were cut down by residents for timber, firewood, charcoal, and land for agriculture.

According to an available report on Uganda’s forest cover released by the Advocates Coalition for Development and Environment (ACODE) process audit statistics, Uganda’s total forest cover reduced by 27% between 1990 and 2005 and total coverage reduced from 4.9 million hectares in 1990 to just 1.8 million hectares in 2015. This represents an average decline of 1.8 per cent every year.

According to the report, 600 hectares of forest cover are lost every year. The report also predicts that in 50 years, Uganda will not have any forest cover left and as such pose climate change risks for the country.

The partnership to restore 200 hectares of forest reserves was signed by the Uganda Breweries Managing Director Mark Ocitti, and Rebecca Mutawe, the Rotary Uganda Country Chairperson at the UBL head office in Luzira, Kampala.

The project worth UGX 245,000,000 will see the two entities continuously plant trees in different forest reserves in partnership with National Forestry Authority (NFA) to ensure that the trees are well maintained, monitored and protected against illegal activities. Planting will be done annually for the next 5 years.

Speaking during the signing of the partnership, Mark Ocitti said, “We are proud to partner with Rotary on this project that will contribute towards reforestation and also support the communities around Lake Victoria catchment areas. UBL largely depends on Lake Victoria as the water we use in our production processes comes from the lake. We therefore need to ensure that the water levels and quality are maintained and improved.”

Rotary Uganda & Tanzania District Governor, Kenneth Wycliffe Mugisha said there is need for corporations and individuals to come together to support Rotary’s tree Planting initiatives around the country. “Under our Mission green project, we plan to plant trees around the country and also carry out mass sensitization campaigns about the importance of conserving the environment and its contribution to the economy. We believe that it is the responsibility of everybody to come together to ensure we fiercely protect and preserve our environment”

According to Uganda Bureau of Statistics report (2009), the forestry sector contribution to the Gross Domestic Product by current economic activity prices was estimated at Shs1,038 billion, of which Shs418 billion was monetary and Shs 619 billion was non-monetary.

This forest protection initiative is just one of the many environmental projects that Uganda Breweries Limited implements across the country. Uganda breweries previously restored 109 hectares of forest cover in Navugulu Forest Reserve in partnership with the National Forestry Authority (NFA) and World Wide Fund (WWF), allowing for the forest to serve its purpose as a catchment for Lake Victoria. 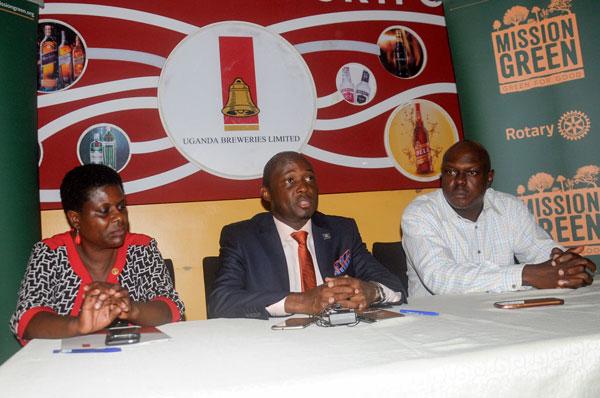 Uganda Breweries Limited through its Water of Life initiative has signed a partnership with Rotary Uganda to jointly restore 200 hectares of forest reserves within Lake Victoria water catchment areas.