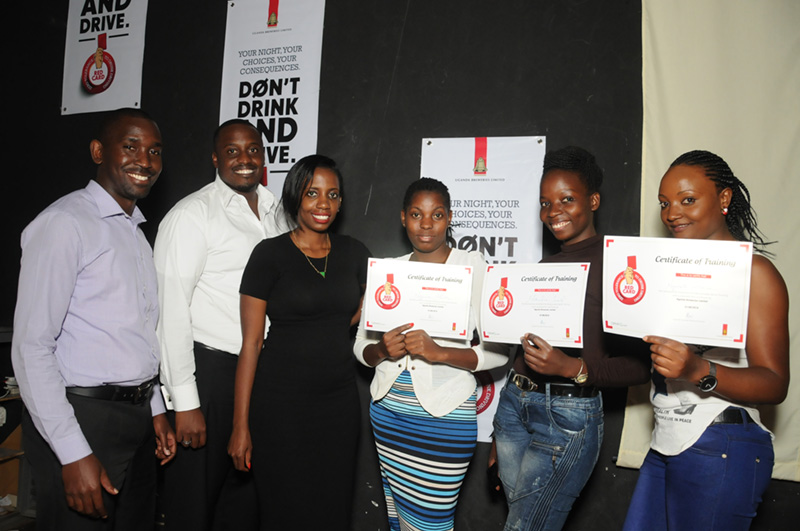 It is one thing to preach Responsible Drinking to the rest of the world, it is another to uphold these same standards we expect of society. And so Uganda Breweries Staff were put to the test last weekend. Instead of an end of week party, UBL Staff were treated to a Red Card Social Media Party with one task to spread as much Responsible Drinking messages on social media between 7pm – 9 pm.

The 2 hours online campaign dubbed #DontDrinkAndDrive #TonywaNovuga entailed staff sharing responsible drinking tips and messages across all their personal social media platforms where prizes were awarded to the most reacted to posts.

Explaining why the employees chose to take front lead on this, Rhona Arinaitwe, Uganda Breweries Corporate Relations Manager said, “They say charity begins at home, our employees are therefore the perfect ambassadors for this campaign given that they work with and understand our brands better; as such are in a better position to ensure that they are not misused.

She added that it was imperative that they set a good example in society and adhere to the company alcohol policy, which among other things, forbids drinking during working hours, drunk driving and any form of alcohol abuse.

Talking about UBL alcohol policies, Ms Arinaitwe said, “At Uganda breweries, we have a zero tolerance to any form of alcohol misuse. We also have a Zero alcohol consumption on our premises except for Fridays after work at the staff bar which is a controlled environment” “The company premises are quite busy given the nature of the business that we run. As such we hold safety for our staff above any business operations. As such we don’t allow anyone to put a fellow staff under any risk as a result of being under the influences of alcohol, we therefore carry out breathalyzer tests on every person entering the company premises.” She explained.

Uganda Breweries leaves by the mantra “Everybody comes and goes home safe.” A value that they have decided to share with their customers. “We want for all our consumers to enjoy our brands but still be able to return home to their loved ones, as such should always consume responsibly and never go behind a wheel while inebriated. She added.

It is one thing to preach Responsible Drinking to the rest of the world, it is another to uphold these same standards we expect of society.