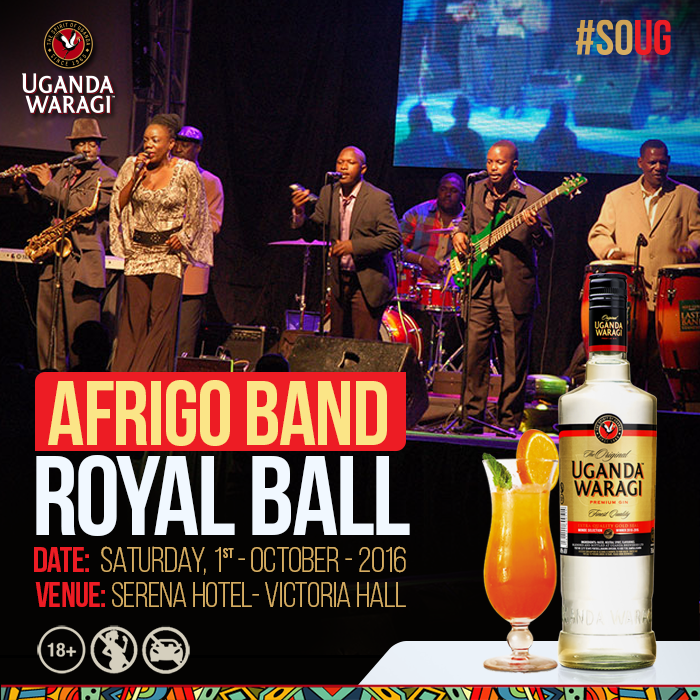 Uganda Waragi-sponsored concert dubbed The Royal Ball proved Afrigo Band’s musical success story over the weekend. The concert, which took place on Saturday, October 1, 2016, was a testament to how much Afrigo Band has grown over the last 41 years. They proved that they have public appeal, but at the same time, haven’t lost their unique quality as a band through their music.

Uganda Waragi delivered well on its promise to serve 200 free cocktails before the concert. Upon entry, guests were served cocktails by Uganda Waragi’s skilled mixologists as they waited in the foyer, for the Victoria Hall doors to open. Uganda Breweries Limited (UBL), which celebrates 70 years of existence this year has been a long term partner of the Afrigo Band.

Andrew Patrick Luwandaga, a renowned TV show host was the event’s emcee. He raised the crowd’s expectations for the concert saying, ‘We are so excited to have you all here for the Royal Ball. We have a lot prepared for you tonight; we will not let you down.’ The concert was held in honour of the recognition that the Kabaka accorded the band during his 61st birthday celebrations. Mr. Luwandaga remarked, ‘We are honoured to have been recognised by the Kabaka of Buganda and we are grateful that we will be performing in front of the Katikiro tonight, who is our Chief Guest.

Moses Matovu, saxophonist and Afrigo Band leader; Eddie Ganja, Herman Sewanyana also sang some of their songs before Joanitah Kawalya moved the crowd with her energetic performance. Rachel Magoola then performed her 1999 hit song, Obangaina, which had everyone standing from their seats and screaming ululations.

While delivering a speech on behalf of the Kabaka, the Katikiro thanked Afrigo Band for delivering 41 years of rich cultural music and said the Kabaka was happy with what Afrigo has achieved so far. ‘Young musicians ought to borrow a leaf from Afrigo Band and learn that in order to be an achiever, you have to persevere and be patient,’ the Katikiro added.

Just like Rachel Magoola and Joanitah Kawalya pledged to raise the bar higher at this year’s Afrigo Band concert, they lived up to their word. The show closed after midnight.