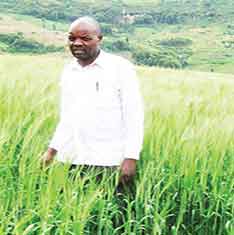 Moses Kiptala is a barley farmer in Mengya Sub-county, Kapchorwa District. When he started farming 10 years ago, his life was miserable as a cattle keeper, an activity that he says was very tiresome. Together with his family, he decided to try something else. He started maize farming but the crop could take longer to mature yet it hard no ready market. “I could not sustain the family with maize growing. My children were in school but it was tough paying school fees,” he says.

Later, Kiptala ventured into Irish potato growing. Because it had a high demand then, the crop became a gold mine for the family. The only challenge was that since it could only be planted twice a year, the family was struggling during off season. “I also tried growing wheat. It was fairly okay but there was no ready market. In 2008, Uganda Breweries Ltd (UBL) introduced the Local Raw Material programme (LRM). I started growing Barley. Since then, I have never looked back, barley has transformed our lives incredibly,” he says.

He adds: “Two of my children have completed campus and the other two (one at Kyambogo University and the other at Makererere University) will be finishing soon. There other siblings are also studying in Kampala. I am so grateful that I have been able to give my children quality education through growing this crop.”

Kiptala says LRM has also enabled him to set up a primary school for the community. Mengya Primary school is fully registered with the Ministry of Education and Sports. The school that runs from Pre-primary to Primary Seven has qualified teachers; children are getting quality education.

“I have also managed to build two permanent houses; one in Kapchorwa town and another in Mengya Sub-county. I’m truly grateful to UBL for LRM programme,” he says.

Kiptala Moses is one of the farmers who have benefited from growing barley, which is supplied by UBL under the brewer’s LRM programme. Other crops are sorghum and cassava that have equally transformed the LRM farming communities’ lives. 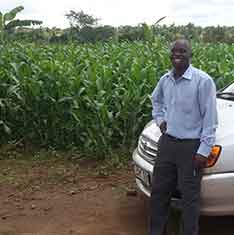 Moses Opio is a sorghum grower in Bar Dege Parish, Batta Sub-county in Dokolo District. He says he has earned immensely from growing sorghum. The former carpenter says the crop has helped him to live his dream.

“I used to earn Shs100, 000 or less monthly from carpentry work but when I started farming, I earn between Shs4-6m and Shs6-8m per-season from sorghum. I am so happy with LRM programme because it has transformed my life,” he says with a smile.

When he joined the LRM programme in 2000, he didn’t know how it would turn out but slowly, he started earning and saving. He has since managed to put up a commercial building of 18 rooms in the trading centre. He owns a farm shop where farmers can now buy seeds, fertilizers, and pesticides.

“Transportation was a challenge but I managed to buy a car (Ipsum) it helps me transport the crop and a motor bike that helps me move around to monitor my gardens and other farmers I buy from sorghum because I am a farmer but also an agent. I managed to buy land worth Shs8m in Dokolo town where I am constructing another commercial building of 26 rooms,” he says.

He would add: “My children are in a good private school, my wife is happy, I have managed to help my relatives. I am supporting two other children and I have also managed to build a permanent six- bedroom self- contained house. As a carpenter I am sure I wouldn’t be where I am today." 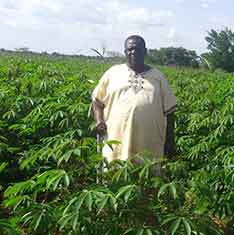 Sam Opio is a cassava farmer in Apac Sub-county in Apac District. He says LRM programme has helped a lot in improving farmers’ lives and the communities.

“Initially, I was practicing mixed farming and it was just fair. I joined the LRM programme in 2010 and I have accomplished quite a lot. I started with two acres of cassava then multiplied to 20 acres. Currently, I have 85 acres of cassava plantation. I am currently supplying some farmers with planting materials and I am also constructing a cassava dryer technology factory where I will employ quite a number of people,” he says.

He says the modern cassava factory, the first of its kind in Uganda, will be installed on December 15, and will start operations in January.

“I have nine children. I have managed to educate them. Three have graduated with masters, two with degrees, two with diplomas and two are still pursuing,” he says. 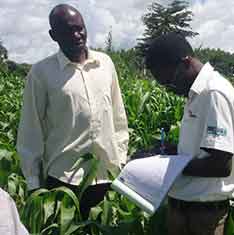 UBL Eastern region agronomist Joas Mulega says; “we started with more than 500 barley farmers and the harvest was about 500 tonnes, which was a good start. The first impact was job creation and this has been continuous throughout. I proudly say we have expanded and more farmers have joined the programme. We now boast of over 2000 farmers. In the last six years, many farmers have constructed beautiful houses. The farmers also grow other crops such as Irish potatoes and maize but barley remains their major source of income- barley has been nicknamed “the school fees crop.” Barley is grown twice a year. On a good harvest, it can fetch about Shs4m per season.”

UBL Northern region agronomist Paul Okello says; “more than 3,500 farmers were initially enrolled for the programme. Currently, the number has increased to more than 10,000 farmers, we are positive the numbers are still increasing. Last year, we managed to set up 20 boreholes in Kitgum, Lamol, Pedel, Apach and Agogo districts for farmers and communities to easily access clean water. The transformation is not rapid but I have seen farmers move from grass thatched shelters to better houses and a change in their lifestyle.”

Find out what the people have to say about UBL's involvement in the community's development.